I was at SIGGRAPH 2014 to present, among other things, a poster of a new relighting method using Voxel Cone Tracing. My schedule was as per usual completely overloaded. Nevertheless, here are some impressions. 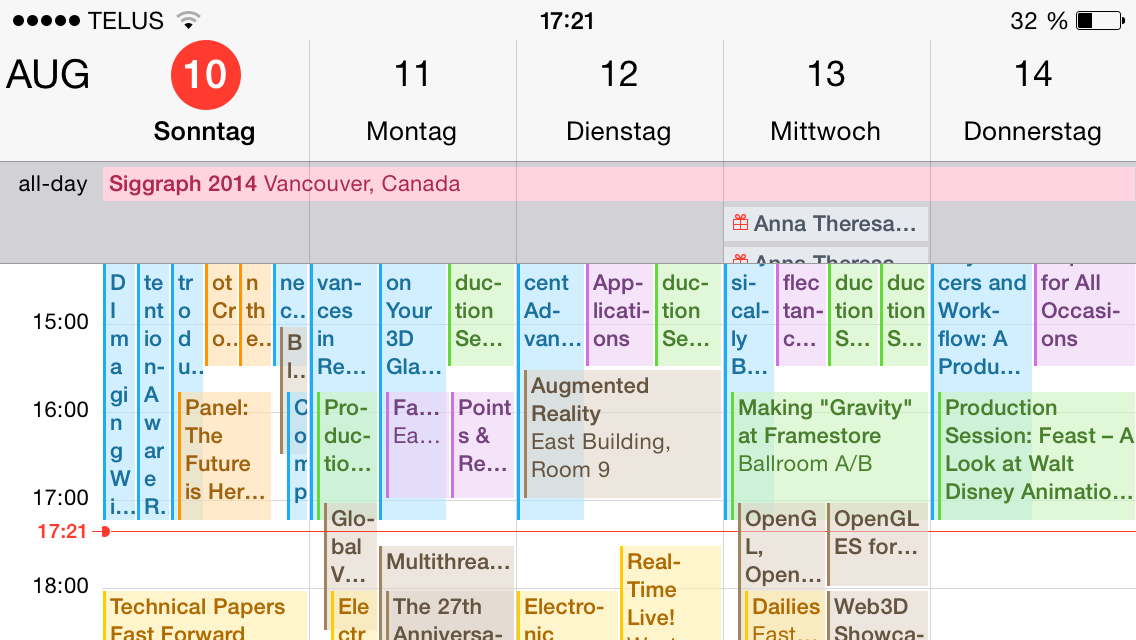 My favorite part about the conference are the courses, specificaly these three:

These are great synchronization points for me. In Advances in Real-Time Rendering I especially enjoyed three talks: Bart Wronskis (@BartWronsk) Volumetric Fog method for Assassin’s Creed 4 and two talks about SSR from Eidos and Guerilla Games, which is currently a thing I’m looking into to simulate low-cost reflections in AR. Also, Wade Brainerd (@wadetb) gave a great talk which was running completely inside the Call of Duty engine, which is I think a perfect way to show case what you have live on the “slides”.

Physically Based Shading had the usual very informative introduction by Naty Hoffman (@renderwonk) (here are the expanding course notes from last year), followed by an important in-depth talk from Eric Heitz about the masking function in microfacet BRDFs. One of the fun talks was delivered at the end by Pixar, which I guess was a clear demonstration on how artists abuse Renderman to circumvent everything phyiscally-based that was introduced by the programmers in the first place.

Although I’m not (yet) into path-tracing, I regularily visit the Light Transport session to delve into the general sampling and filtering madness that dominates the entire subfield. The course usually starts with a nice introduction into path integral forumlations and then expands on papers which show different methods to cope with the noise. One presentation that I found interessting by Ondre Karlik presented the Corona Renderer, a project with a focus on being more easy to use, with less but more intuitive parameters to manipulate.

The rest of the conference, such as the material of the paper sessions Fast Rendering and Light Transport, unfortunately still rests on my backlog.

I was missing the Geek Bar this year. This place comes in handy when you have multiple sessions overlapping the same time slot, which happens every time for GI/rendering talks. The Geek Bar streams multiple sessions into the same room, and you can switch around channels with your headset.

Vancouver as a location was pretty nice, had some good party locations and was a welcome change to LA.